← Tonight’s Community: Why You Must Watch It Tonight
Vampire Diaries “Homecoming” :Oh Stephan,what have you done? →

Community #AnniesMove Recap: Did You Know That When It Snows My eyes Become Large?

In tonight’s “Studies In Modern Movement” Annie is moving into Abed and Troy’s apartment and judging by  the approch of NBC, writers and cast having the twitter accounts of characters tweet throughout the whole episode I knew that I am about to watch a light hearted, fun episode and I was right. Let me start with comments I read in the A.V Club  comments section in their review about Community calling the advertising twitter campaign that NBC initiated cheap and gimmicky,that might be the case (when is  advertisement ever not gimmicky?!) I am glad to see that due to lower ratings NBC are getting behind the show and starting to encourage audiences to watch it I don’t care why it’s happening I am just glad that it is.I am mentally prepared to have this show in my life for a long time.Reviews are not raving about this episode which I understand but I think that is because  Community has set the bar so high that it’s always compared to its own previous episodes when it can get a B on the AV Club compared to other sitcoms of the night or even the week it gets an A so I stopped paying attention to that grading system and I just enjoy the show for what it is. I might not be a TV analyst/journalist who does this for a living but I know and I love my TV shows , whatever I write are just the opinions of one person who is watching TV and if there is anyone that agrees well great then I am not alone in the world after all ( wow life got dark!) . I needed to get that out of mys system first.

The story is divided into 2 parts in the beginning: Annie and the study group in Annie’s apartment and Jeff’s at the mall. the story is pretty simple, typical sitcom premise appealing to everyone even those who think Community is weird.  Annie is warned by Britta regarding the potential of hating Troy and Abed after moving in for finding what’s adorable annoying; she finally does and freaks her  out and she tries to act cool and adapt to the new situation,  Annie is worried about being uptight which hasn’t been mentioned openly since season one’s sexual awareness episode. She is trying to fit in and we see her insecurities about being in the group as we have seen everybody else’s insecurities throughout the show. Part 2 of the story is Jeff faking sickness to go to the mall and he engages in an elaborate scheme to be believable and subdue Britta’s suspensions employing the help of a Gap saleswoman who later tries to hit on him but he is more aroused by clothes than anything else.

As we all know of Community the stories are never that simple the 2 stories become 4, Jeff and the Dean having a lunch date at the mall, Britta and Shirley taking a ride and picking up a hitchhiker named Jesus,Annie getting acquainted with her living situation with Troy and Abed  and Pierce trying to fix up Annie’s apartment for inspection by the super “The Senator”.The stories are all equally funny and all characters get their fair share of the spot light regardless of one story excelling another. Annie and Trobed have it out when she discovers that those morons built a blanket fort for her to sleep in when there is a totally viable bedroom that is being used for virtual adventure, that room really scared me,those guys are inside their heads too much alittle Annie comes in as a big help. Jeff is caught in at the mall by Dean Pelton who is wearing khaki shorts and ends up wearing the same exact outfit as Jeff’s, Jeff is blackmailed into spending the day with Dean Pelton and as funny as that sounds you don’t know the half of it, the day turns into a date, they first go to lunch as Jeff orders for Greg AWWWW, then they go to those karaoke type of things at the mall  and sing one of my favorites; Seal’s “A Kiss From A Rose” , though now it’s my favorite for a whole new reason, then Jeff discovers that he is being stalked by Dean Pelton and an interesting piece of  information comes to light, Jeff has a therapist?! will we ever see that therapist ?and for how long has he been in therapy?he seemed depressed all he wanted is to be alone for the weekend…that’s sad. will there be a story line that reveals Jeff’s potential depression?

Britta and Shirley are having a fight in the car about religion and it puzzles me why Shirley’s religious beliefs are such a driving power to her story lines as hilarious as it was there must be a better use for Yvette Nichole Brown’s talents. Britta picks up a hitchhiker named Jesus and who he is starts to please and terrify Shirley and Britta as they are both trying to prove a point later they draw the line with racism and they throw him out of the car. Pierce is in Annie’s apartment trying to fix it up as that brilliant someone in the writers room who keeps pitching great ideas would have it Chevy Chase is given enough room to do what he does best , some great physical comedy. Pierce ends up inhaling the toxic fumes of the paint and swimming on the floor in a sea of white paint “This is all gay code”. Pierce is saved by the Super who does not look like a rapist at all, he’s actually nice. Annie comforts Pierce as he leans in for a kiss claiming he has brain damage… 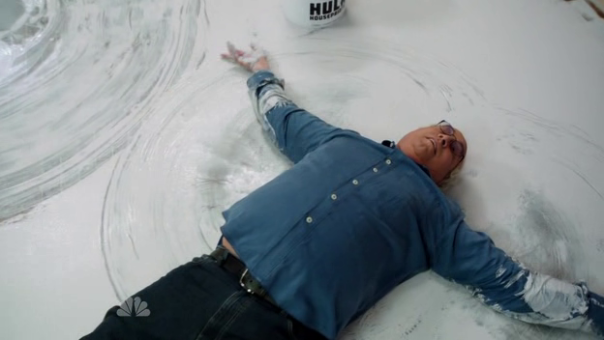 Troy and Abed are distraught by Annie’s ultimatum, the room or her, and with the group’s help they fix up Annie’s new room and decide to give up their room and live in the blanket fort room instead of actually keeping their room and giving the other one that is slightly bigger to Annie… the group gathers in Annie’s little too much pink room for a great study group moment. I love those warm moments between the study group members, it reminds us of why exactly those knuckleheads hang out together. Jeff comes in and admits his lie but not to be a better guy but because he just went through a traumatic experience with the Dean and he figured since he left the Dean in the mall he might as well he puts it out there before Dean Pelton does. Dean Pelton tweets the duet of him and Jeff and the group mocks Jeff as they sing the song. what a great note to end the episode on.

Though the episode is not the best of Community I still think it was pretty great, it had some great heart felt moments and it had some laugh out loud moments. I enjoyed it tremendously and I can’t wait for more Annie and Trobed stories and more and more of Jim Rash’s comedic brilliance, please oh please the powers of comedy give him more story lines with Joel Mchale.

Primary teacher who loves TV like crazy. I watch more TV a week than anyone i know. I usually have crazy pairings on TV that no one sees but me and a good eye for spoilers. Twitter account :http://twitter.com/#!/lonestarjrs
View all posts by lonestarjrs »

← Tonight’s Community: Why You Must Watch It Tonight
Vampire Diaries “Homecoming” :Oh Stephan,what have you done? →